Quick rust bluing--- Back in black!


The black finish left by the Birchwood-Casey Super-blue just wasn't doing it for me this day.

The product is just fine, very fast, easy to apply, etc, but the result is not particularly durable. The cold bluing process affects just the very surface of the metal and, while great for very minor touch-up, it is not as well suited to high wear areas like the heads of kanna blades and such.

There is a simple process that you can perform, in your kitchen (maybe..... Your call), using ingredients that you already have, that results in a very durable black surface on iron and steel. Rust resistant, too.

Rust bluing. Red iron oxide (Rust, bad!), can be converted into black iron oxide (Magnetite, I believe), which will prevent future formation of the bad red rust. The process is very simple, but, I'm warning you now..... It looks scary, and feels oh so wrong!

First the scary part. It is actual rust that gets converted, so the metal needs to be fully covered in red nastyness. Not big chunky rust, more of a thin film of oxidized metal. Traditional rust bluing is a slow process, employing various techniques to rust the surface of the metal. Simple exposure to the elements works well, but humidity tents are faster. An old favorite is the manure pile (as my friend Brandon reminds me).... Just stick in the metal (Deep. Keep one hand free, to plug your nose!), and the next day the steel will be nicely rusted.

I don't have any manure handy. Manure works well because the moisture, combined with the heat of decomposition, speeds the formation of rust. We can do one better, by using a mildly corrosive solution to speed the process along. I have been using a simple hydrogen peroxide and salt solution. That I do have.

Before I start..... The process IS corrosive to the metal, so prudence dictates that any areas where I DON'T want rust (edges) need some protection, a resist.

In this case, I used clear nail polish from the $store. I have used paint, permanent marker, and varnish, too. Nothing has worked perfectly, but failure of the resist isn't that big of a deal. I still try, though.

This is a very simple process, nothing is exact. Most anything will work, so feel free to adjust. I am STILL adjusting, and things just get easier. Hot liquids (hydrogen peroxide, in this case) can accommodate a large amount of solute (salt), so I warm the peroxide using a heat gun. You can use a microwave to heat the peroxide to boiling and make a super-saturated solution, but I find that this works just fine. Maybe 3 tablespoons per 1 cup of peroxide? It's not exact.


The only aspect of this whole process that IS exact, is the need for cleanliness. The parts need to be clean and oil free. They NEED to rust, and anything that impedes that process will affect the outcome, leaving things looking blotchy. I typically solvent wash (acetone or lacquer thinner usually), then use a spray cleaner like 409 or spic-and-span (sp?), then finally, hot soapy water. I have just used the hot, soapy water and it was OK.

Now that the part is clean, it needs to stay that way. I wear rubber gloves to avoid contaminating the part with my skin oil, but that's the only reason. Nothing here is toxic..... Cool!

I have noticed that some metals will respond differently to this process, and be quicker to form oxides. High carbon is fast, while the softer iron is slower. Certain blades are more resistant than others. A small Japanese hammer head doesn't want to rust at all. I wonder what kind of iron it is..... Very strange!

Anyways, one way of achieving a more even effect, is to activate the metal surface. A brief soak in vinegar works well, and is available in the kitchen. Phosphoric acid, muriatic acid, or ferric chloride might not be (not even in MY kitchen. There are limits!). Brief exposure seems to give the process a jump-start.


Put the peroxide/salt solution into a corrosion resistant container, then submerge the metal parts. The activity will be immediate, and looks rather alarming. Bubbles will rapidly form on all exposed metal, instantly oxidizing it, and thereby forming rust. A foamy, rust colored scum will accumulate within minutes. 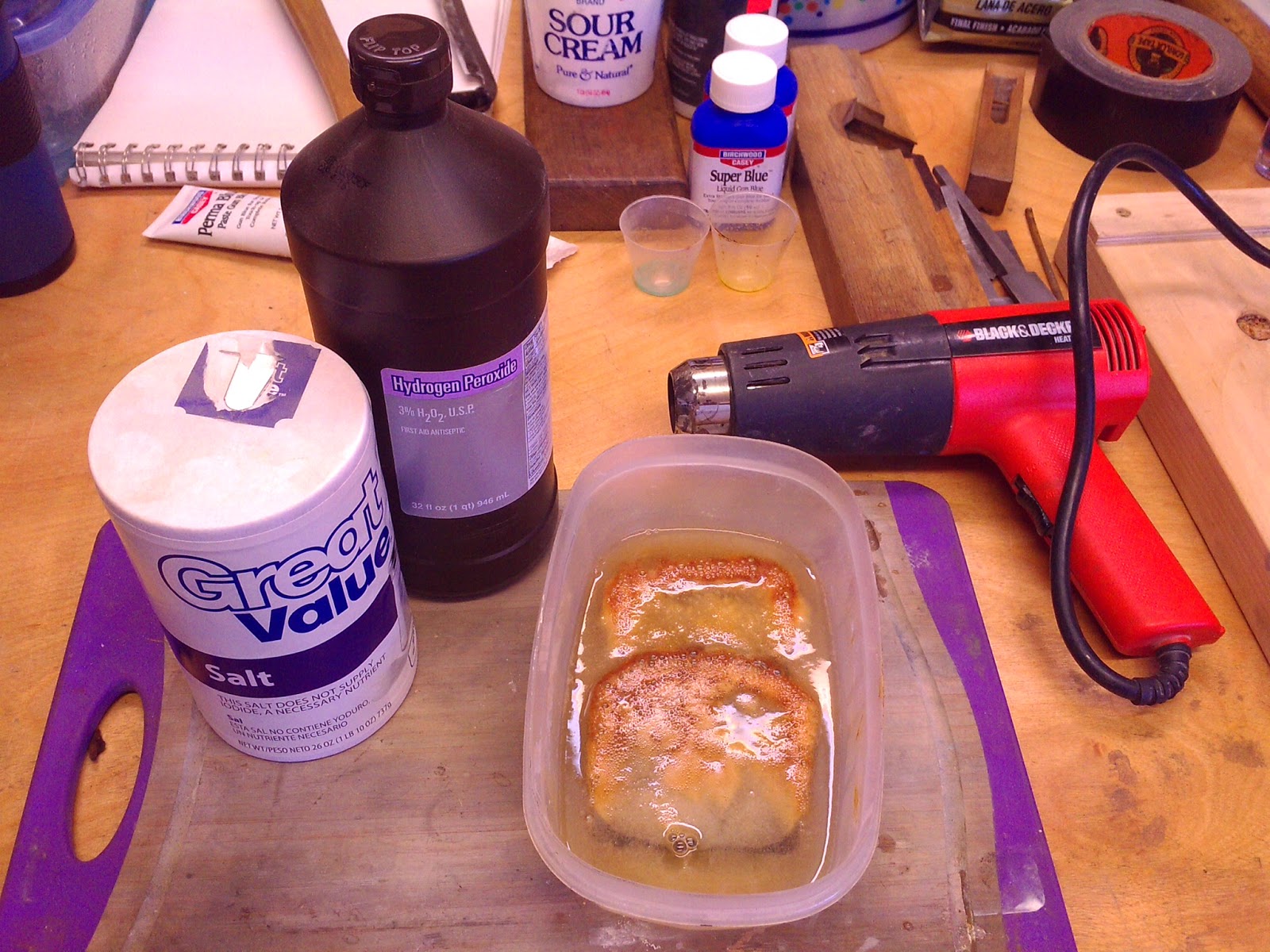 After 5 minutes or so, I remove the parts. 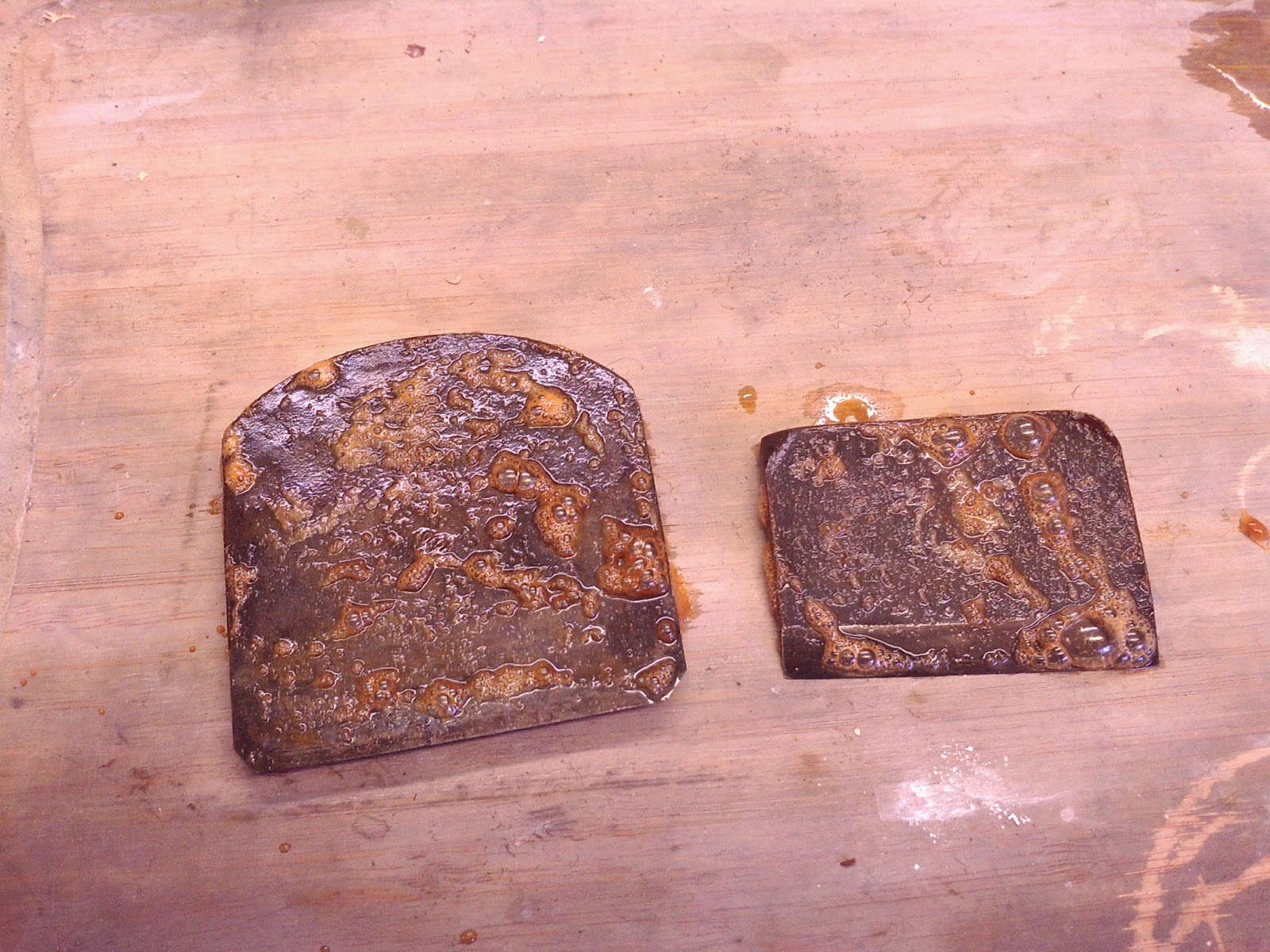 Dry them with the heat gun. This is scary, because the parts rust, right before your eyes! 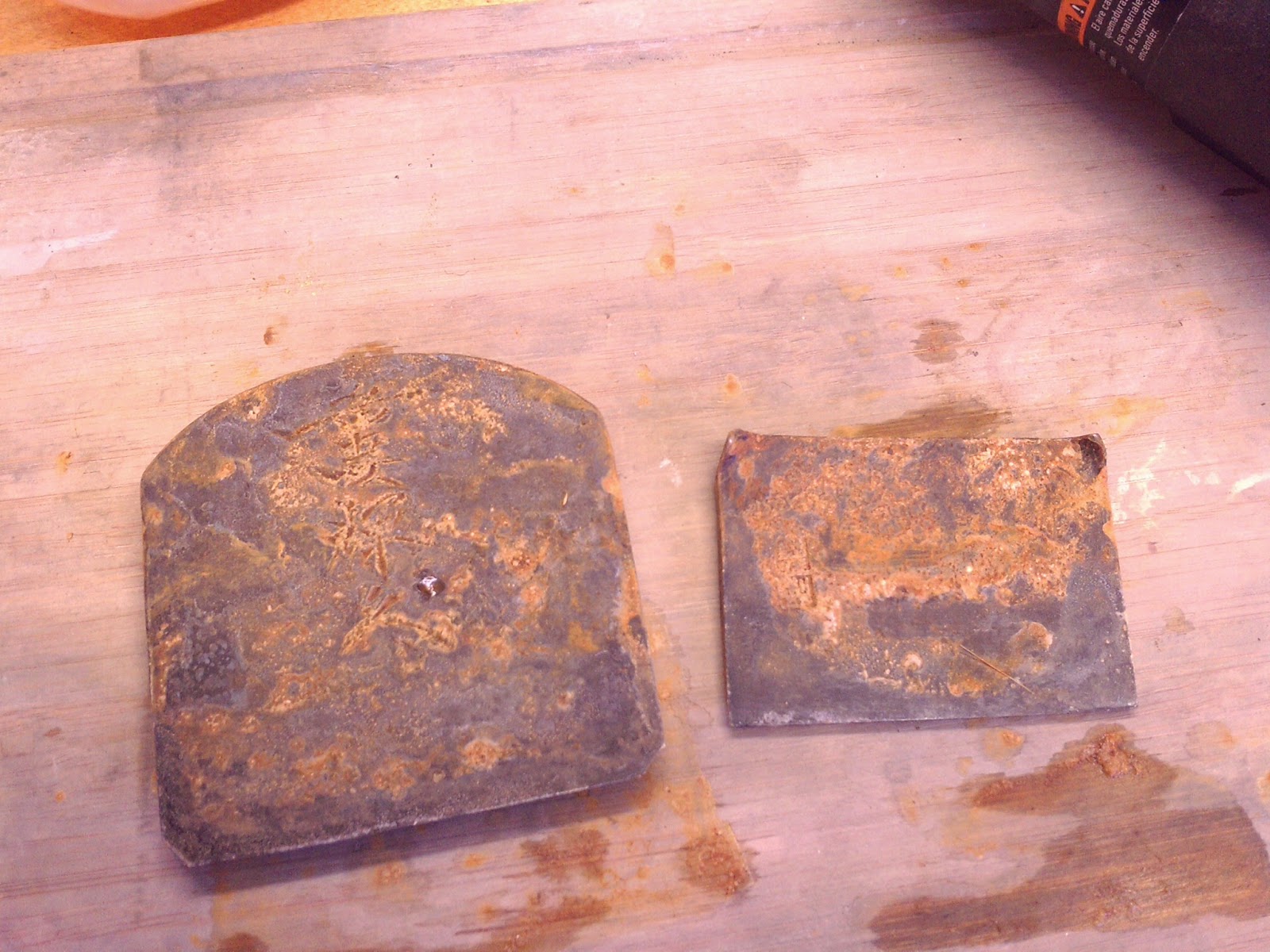 Even worse! It looks like your worst nightmare (Yeah, I know..... If my worst nightmare is about rusty tools, I've got an unhealthy attachment, a phobic disorder, or a very unimaginative mind. Rusty tools rank pretty far down on my list, all things considered). 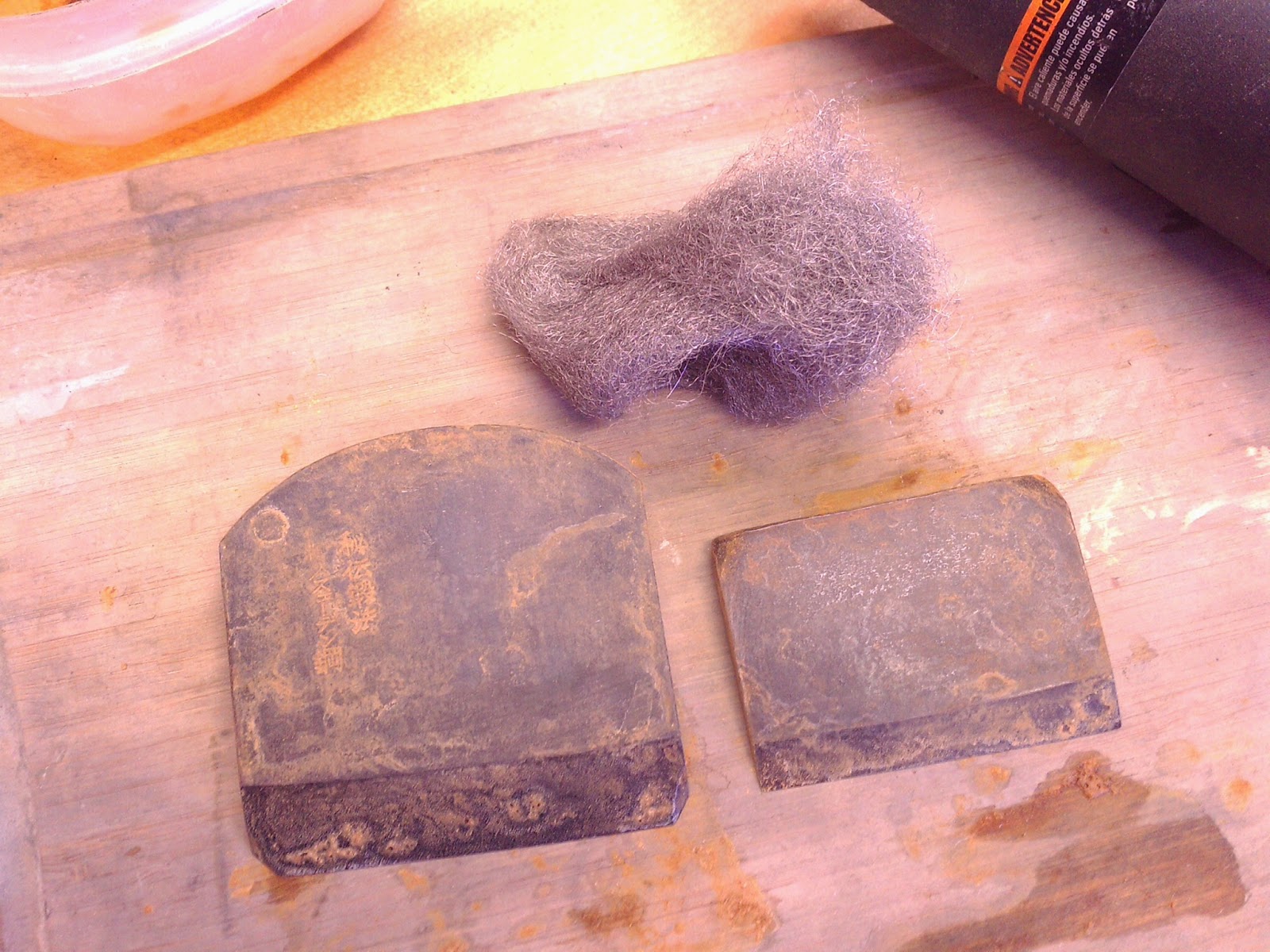 Don't remove the rust! Rust is what you want! A thin, even coat of light, surface rust. 5 minutes of oxidation won't form deep pits, or anything. It looks worse than it is. 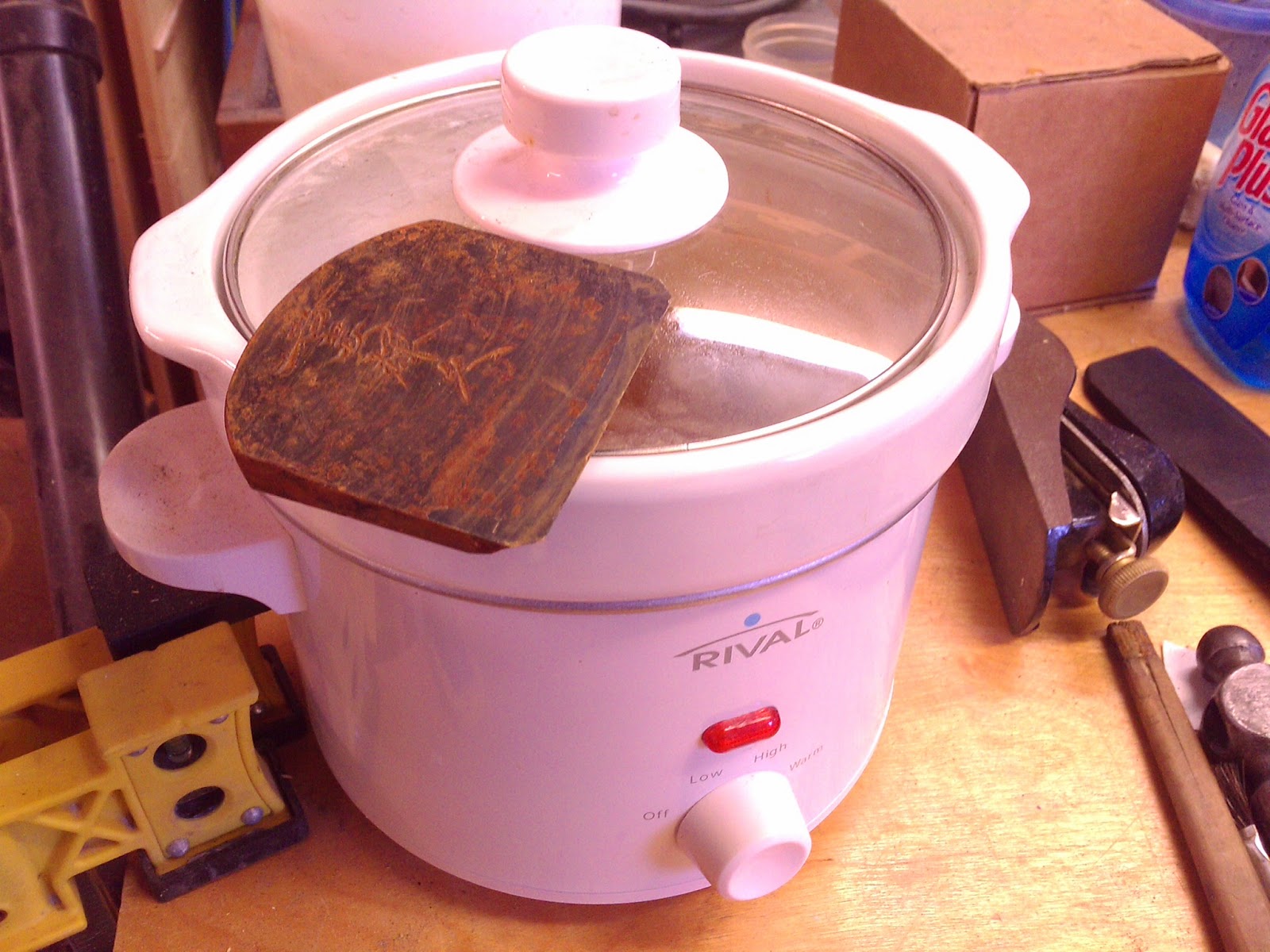 I use my magic crock pot (on high heat), but boiling water, in a pot on the stove, works even better. Heat, applied through a conductive media, in the absence of oxygen, transforms the red iron oxide to black magnetite. Chemistry, physics and magic belong together, in my mind.


After 20 minutes in the crock pot, most of the red rust has been converted to black oxide. 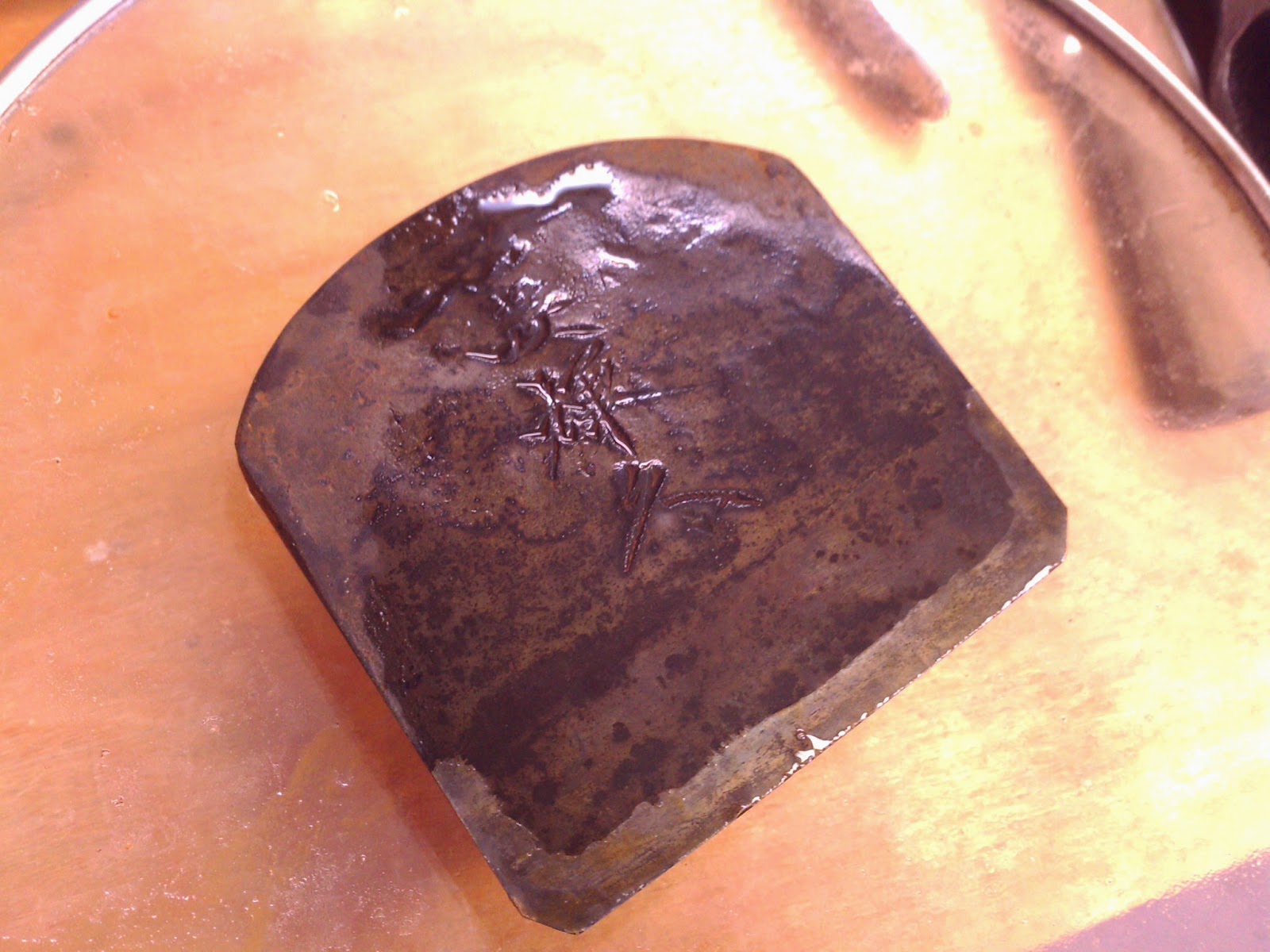 In this picture, the thinner black is the new black oxide forming on the bare metal. The thicker, dark black is the original forge blackened surface. Rust bluing forms a thick, durable surface, but requires multiple cycles to build depth. Good stuff.


The hot water in the crock pot is depleted of oxygen. No oxygen means no rust, so you can leave the steel in the bath as long as you want, basically. Boiling water is well below the tempering temperature of any blade, so no worries about soft edges either*. Boiling water will convert the red oxide in just a few minutes.

*And may actually help to relieve some retained forging stresses. Odate wrote that he was advised to try putting a difficult, temperamental kanna blade onto a hot tin roof to relax it. This is much the same thing. More on this later......* The handle of the chisel is covered by electrical tape, as is the ferrule. The blade will be submerged, and I don't want any water to touch the wood of the handle. Water could accidentally wick up at the blade/ferrule joint, causing rust to form inside, under the ferrule. I only want rust were I can see it.


Repeat the process, rust, then boil.

Things are looking REALLY scary after the third rusting! 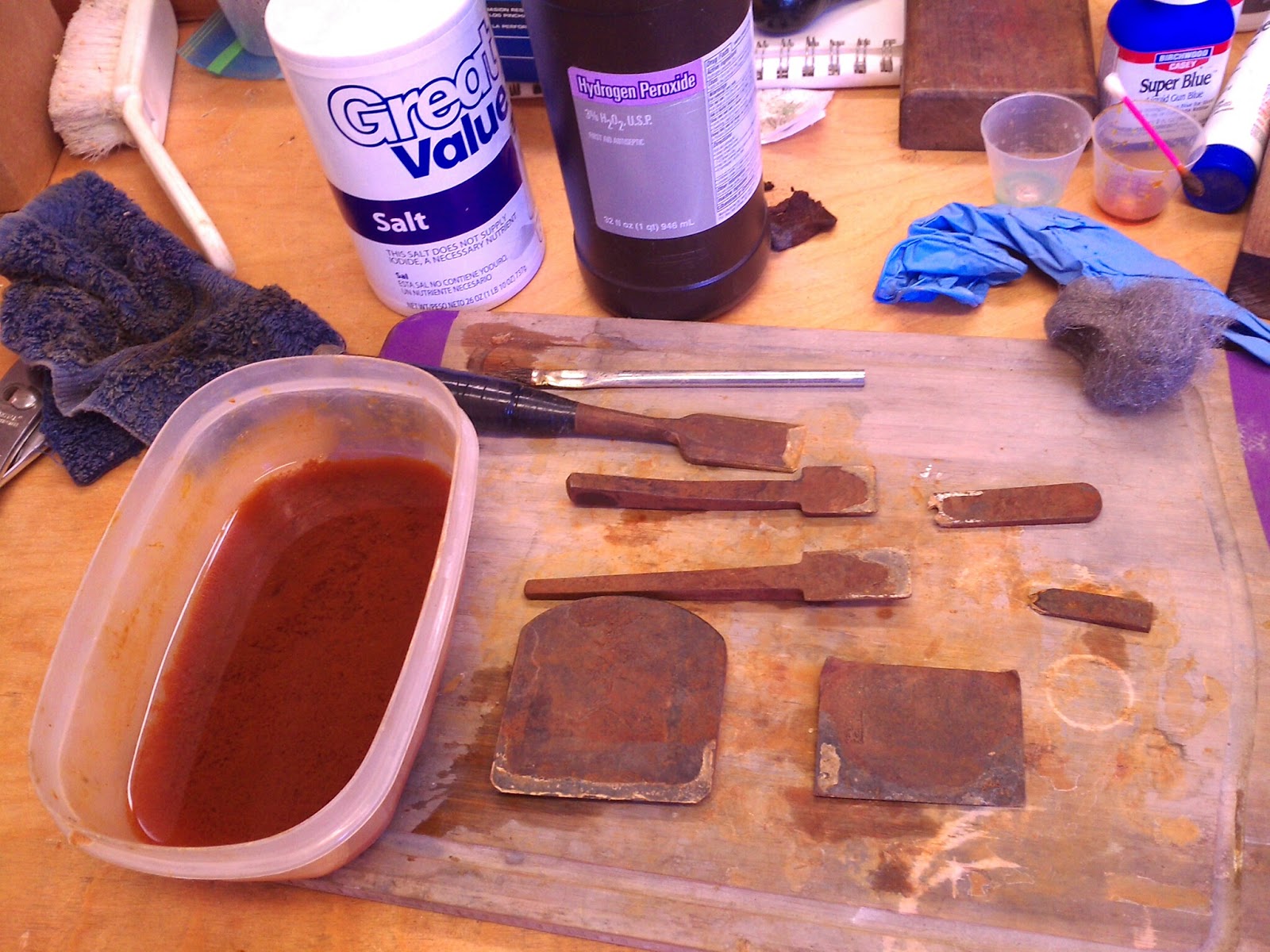 The solution will be good for two applications, but making new promotes more vigorous rust formation.


Four cycles is enough for now. Not perfect, but good enough. 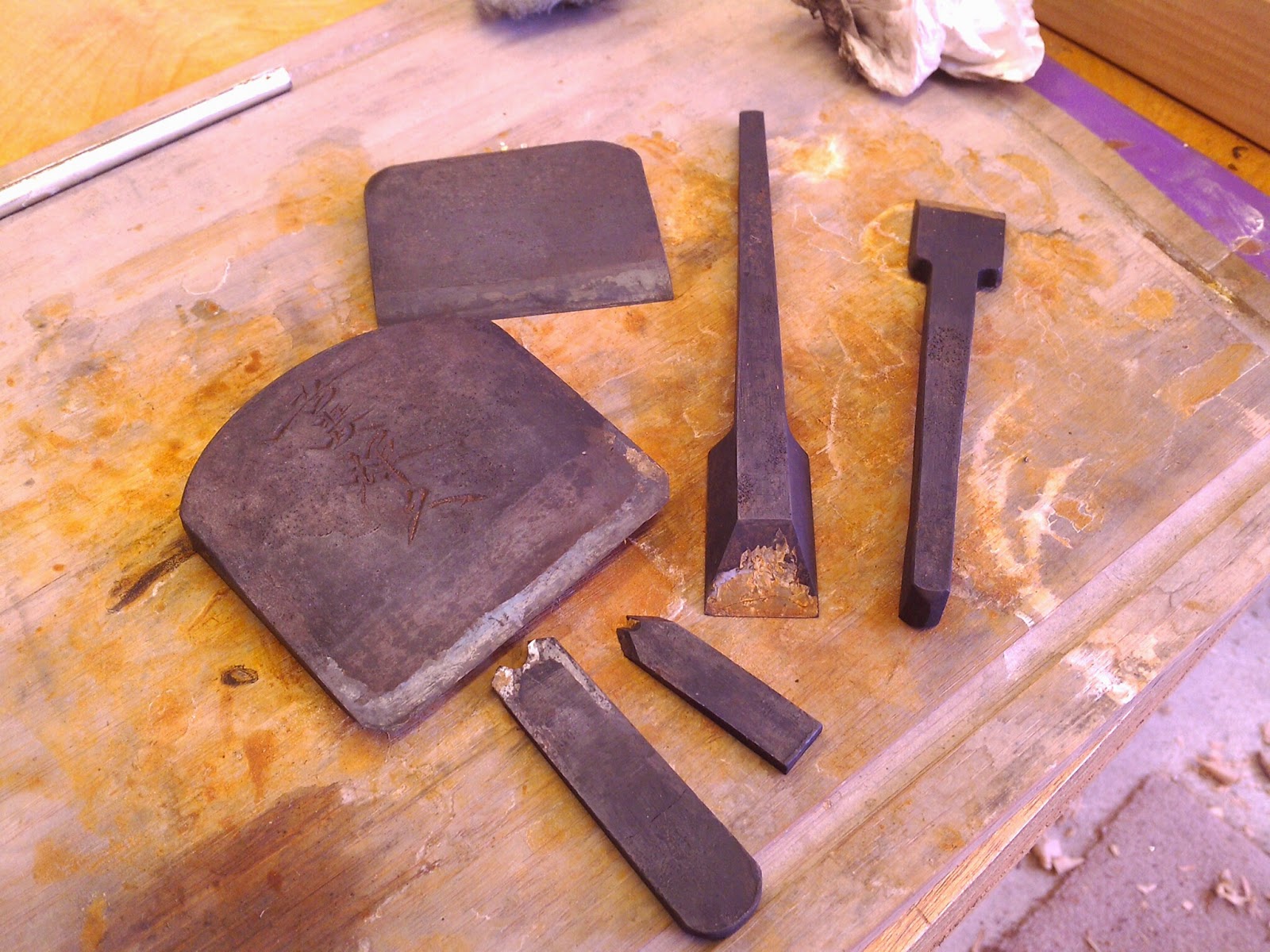 The resist has peeled, and the bevels look like hell. They will look better after sharpening.You can repeat the process until the surface is so thickly developed that it resists new rust formation. This self limiting aspect is what gives rust bluing such a well deserved reputation. It is durable, very effective, and achievable using simple means. AND it's a safe process!

When you are satisfied (or bored), give everything a good coat of oil. The rust bluing offers a measure of protection against future rust formation and has a micro porous nature, perfect for sucking up, and holding, lots of oil. With a protective oil, it's a VERY good finish.

Got a tool that you want to blacken, but only have 1 hour?


I don't even bother with full immersion any more. Just brushing the tool is good enough. Less wasted solution and faster, too. The trick was using the heat gun. It dries the metal quickly, and the retained heat helps accelerate the rust conversion. I've gotten pretty fast at this. I can have a batch of tools boiling in the crock pot, while simultaneously rusting a second batch using the solution. By the time the solution is dry, it will be time to remove the first batch from the boil pot.

I can do about 5 cycles in 40 minutes, then an extra long boil for the last 20 minutes. You can leave everything submerged overnight, then do one more (boil only) in the morning. The water will look like black tea, and makes a good iron rich fertilizer for the garden. Nontoxic!

Cold bluing solutions (Birchwood-Casey, Brownell's etc) sort of dye the metal, affecting just the surface. Paint forms a film, lying on top of the metal. Rust bluing is similar, but it's not paint, it is the actual surface of the metal, slightly transformed.


Another beautiful aspect of a rust blue finish is the maintenance. Every metal finish treatment is subject to wear, and requires periodic renewal. Rust bluing is maintained and renewed every time that you oil the metal. Over the years, as red rust forms and then gets oiled, it will gradually turn the black to a rich, dark brown. Birchwood-Casey has a metal treatment that simulates this look too, called "Plum Brown". OK, but not the real thing.

Cosmetically preferred over paint, effective against rust and durable in use, old fashioned rust bluing was the gold standard of metal treatments. This is the finish that the frontiers men applied to their guns, meant for hard use, under extreme conditions. It's also time consuming and laborious finish to apply (compared to a chemical dip.....) so, like many good things, is pretty much gone. 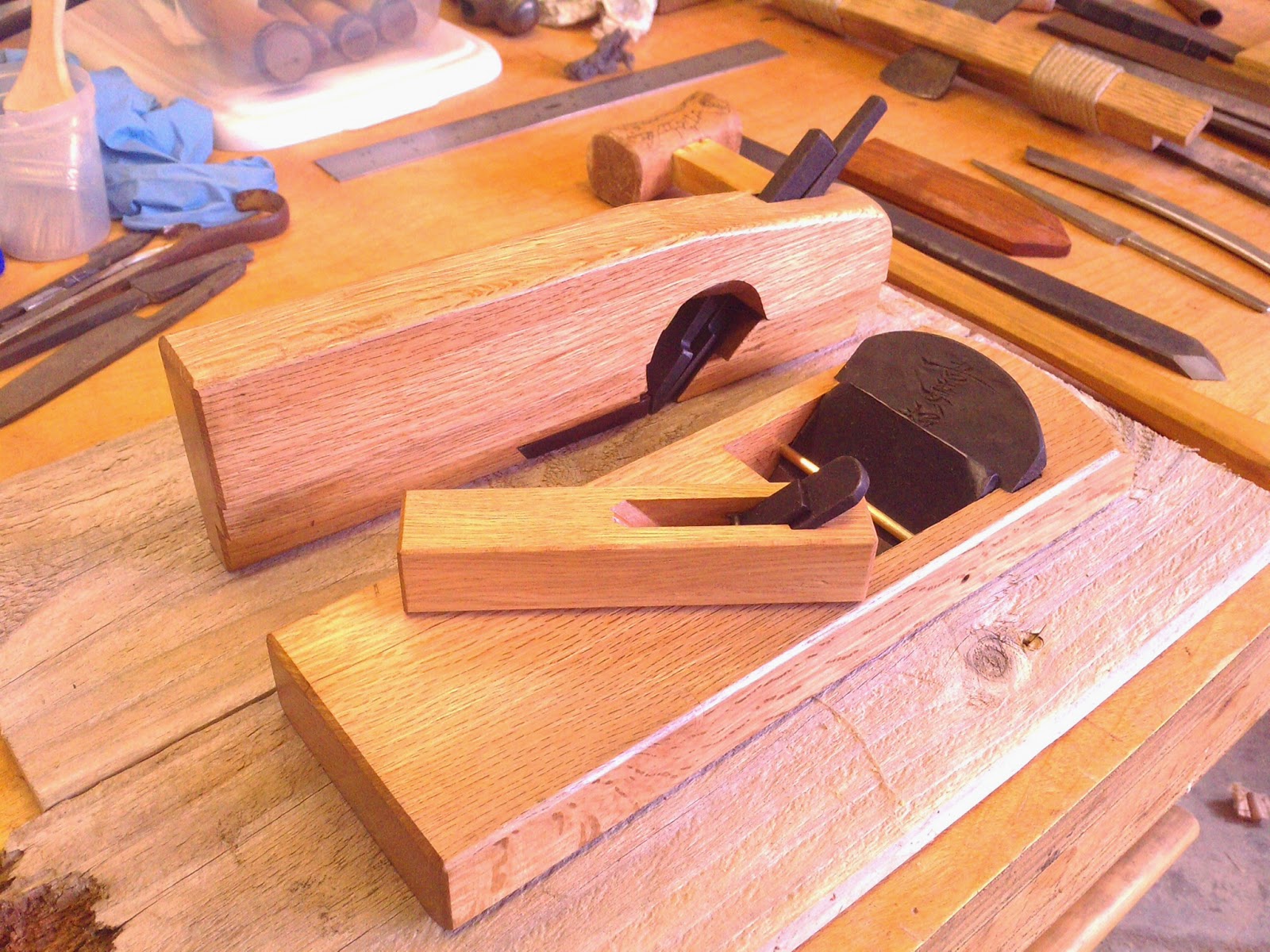 Who would a' thought? Rust?!