Sebastian has been badgering me mercilessly (rightly so!) for quite a while now, to make a Japanese style saw sharpening vise. The style is as such.... 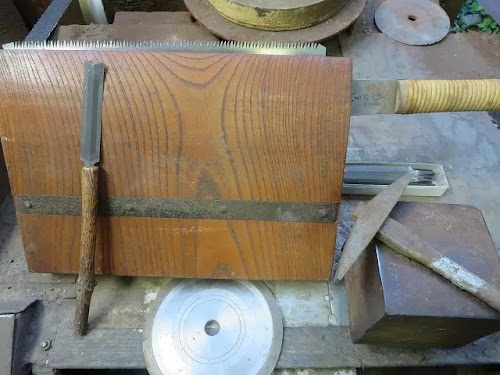 A nice example of the real thing. Mine surely won't be as nice as this one, but hopefully the functionality will be similar.

This is a diagram that I found, a cross-section of ChoMasaru's saw vise. 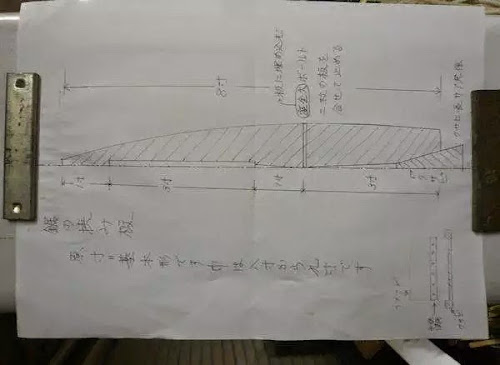 Who better to emulate, right?

The saw vise itself is a simple device, being two boards joined together at a hinging point, then tightened using a separate wedge that gets tapped into place at the bottom of the assembly.

Simple stuff, but very handy to have. Why is it taking me so long to make one? I blame my butterfly brain......flitting from one interest to the next, la-di-da da....

Right off the bat, I'm deciding to do this slightly differently, seldom a good idea, but I want to use some of the salvaged materials that I've got on hand. I think that stock a true 1" thick and 18" long would be a good size for me, but I don't have anything handy, so I go with two 18" chunks of 2x12.

That's fine, I don't think that the extra weight will bother me and I intend to thin down the material during the shaping phase, but the big issue is that the grain direction of my vise will be running the "wrong" way. Mainly, the wedge will be trying to split the wood every time I tighten the vise, so I question whether I will be able to tighten this guy effectively. I guess we'll see.

Not enough time to do the job right the first time......How does that saying go?

A few years ago, I started working more by hand power, less by machine. That ( and learning how to sharpen my damn tools!) has done great things for my abilities to make nearly everything. Even my use of power tools has improved through this. Well....what started as more of a novelty.....

Hand tools are now all that I've got, haha. 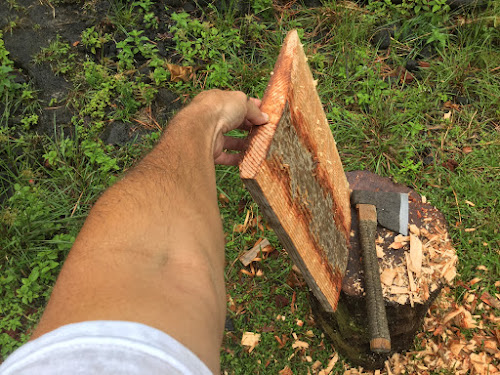 I love the off-grid lifestyle, but occasionally I do still miss my tablesaw.

Two hatchet, West and East meet.....who shall be victorious? 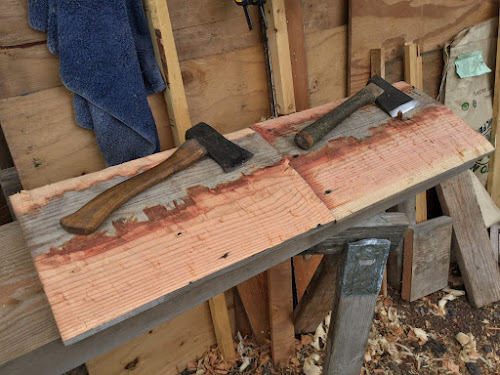 Actually, a broad hatchet would be the right choice here, but the main idea is to remove some excess wood quickly, and they both did that task well. The Japanese one is sharper, haha. I rough out the shape using the hatchets, then finish the shaping using the kanna.

The inner surface of the vise is reduced, to allow room for the body of the saw or to accommodate the back/spine of a dozuki. 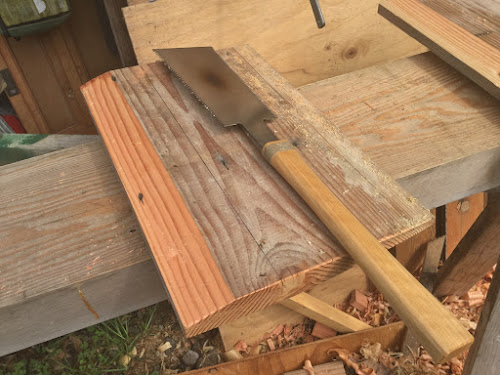 I cut the shoulder lines of the rebate using a saw, then hog out the rest using whatever plane will work.

After watching every Japanese YouTube sawing video that I can find, I have noticed one common act. The carpenters start every cut using the crosscut side of the ryoba, then as soon as a tiny groove is started, you flip the saw and start ripping. 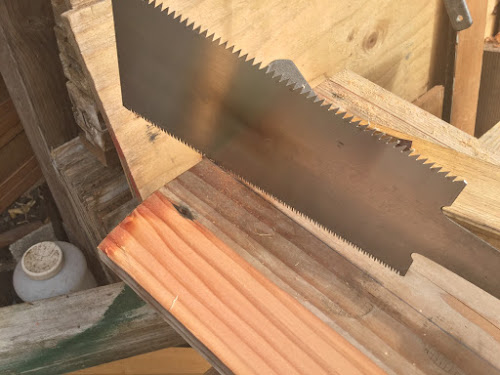 It only amounts to 2-3 light strokes, PUSHING the saw slightly, but it makes starting the cut SO much easier...and accurate, too. The shape of the teeth on a Japanese saw being what they are, if you push the saw slightly the teeth are exactly like little knife blades, scoring the wood fibres. Just as with a marking knife, use a light touch for accuracy.

After the shoulders are cut, I make some room using a Japanese groove plane, a Shoko-sakuri kanna. While good ones are very expensive new, old ones that are at least as good go for about a dime-a-dozen. I think they are handy to have around. And the blades are (usually) beautifully forged. 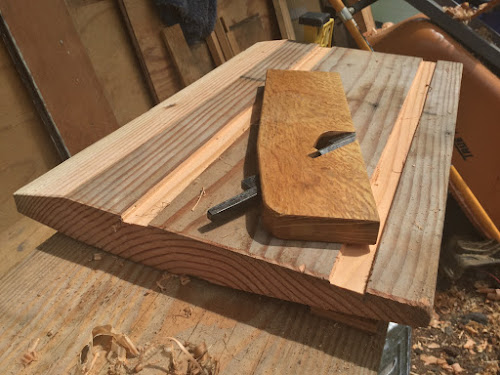 There are a couple of pointers here, regarding fixing up the old beaters....from one of my favorite Japanese carpenters.

After cutting out the grooves to make some room, I hog out some more material using one of my oldest, ugliest kanna. 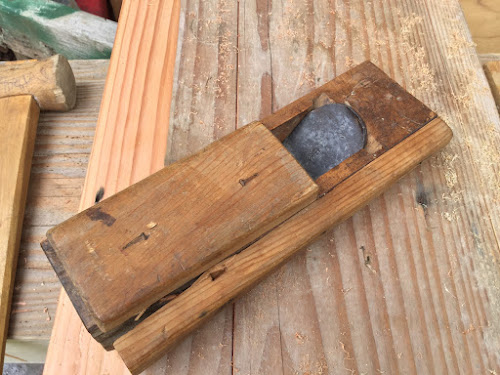 I love this old thing. How many people have touched this, used this tool, over the years. And it has been used! The blade still has 3/4" of steel left, but I don't think that the dai can be used for much longer, haha. 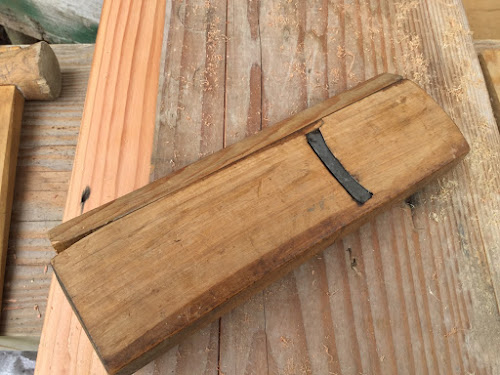 The softwood body ( not oak, someone just decided to use what was at hand, obviously. Hmmmmm....familiar.) is gently rounded in width, a hollowing plane, a sotomaru kanna/scrub plane. 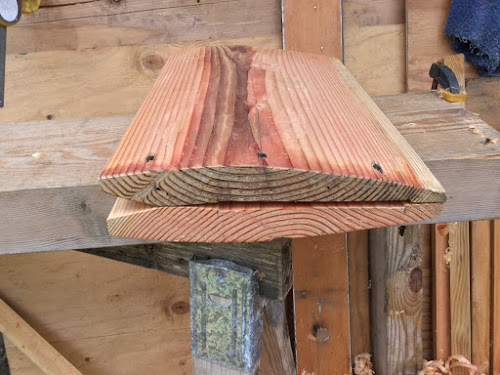 On the home front, we were all set to put in an offer on a nice piece of Hawaiian property, two paired lots on a dead end street, warm lower elevation, and just all around nice. Our realtor suggested that flooding in that area is occasionally a concern. 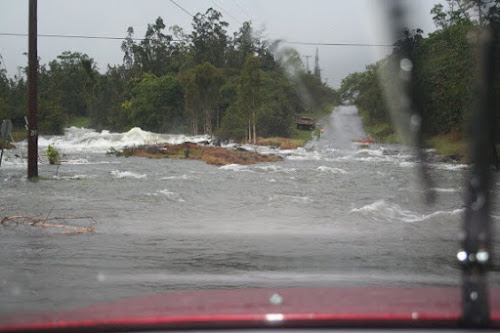 This is the intersection of 39th and Pohaku during the deluge of 2008, right where we would turn right, to get home.

We decided to pass, haha. Thank god for conscientious realtors.

Posted with Blogsy
Posted by Jason at 10:35 AM