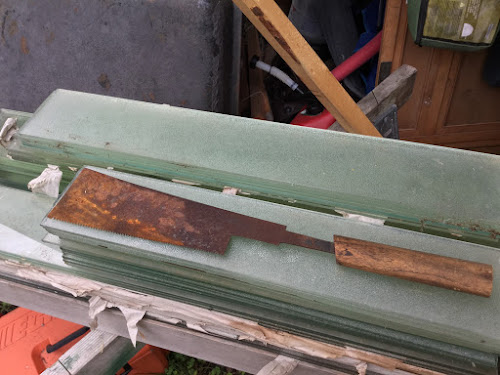 Oh goody! More rusty saw fixes! Just part of my ongoing effort to maintain my status as "Author of the most boring blog ever". Actually, hammering on these thin steel saw plates has been one of the most enjoyable pastimes that I have found in the recent past. Wow! I guess that someone needs to get a life, haha!

So Ellie and I were out scrounging some used building supplies, bought from a nice young Minnesota transplant who had some leftovers from a construction projects that he had been working on here in Hawaii. 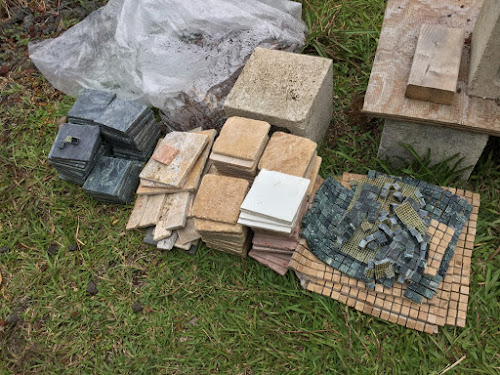 Mostly tile remnants, natural stone though, and I am beginning to see a marbled tile bathroom sometime in our future.

A nice stack of jalousie glass. 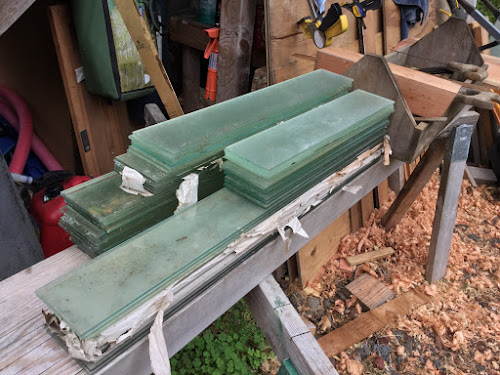 Now all we need are the frames.

So, me being the notoriously hard bargainer that I am, I gave the kid even more money than he was asking for. He was so pleased, that he threw in this old wooden tool tote, and wouldn't you know it, there were some rusty tools inside. Sweet! 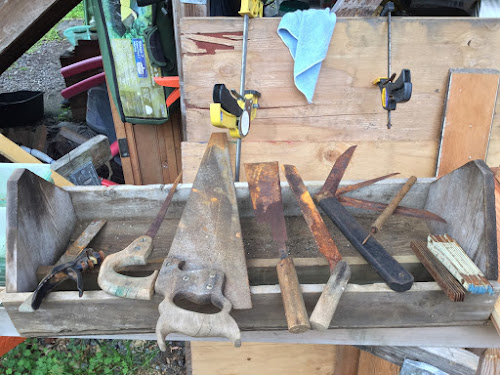 After picking out the REALLY junky stuff (shocking though it might seem, some tools are so trashed that even I don't want to bother), this is what followed me home. The selection is actually kind of interesting.

But the real prize, for me at least, is the kataba. Here she is, in all her 245mm rust covered glory.

It even has the wrong style of handle, haha. Zelikova wood, I think. 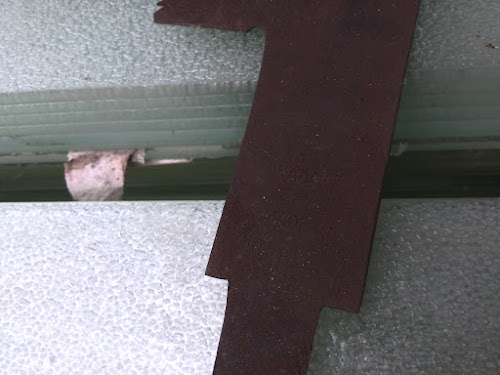 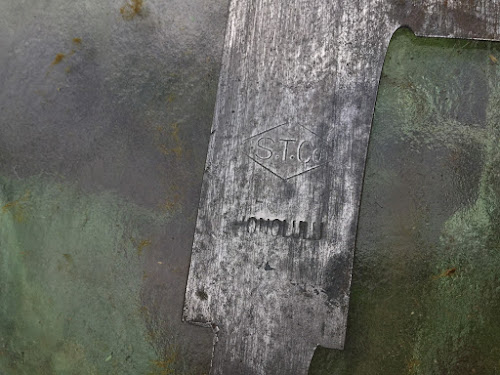 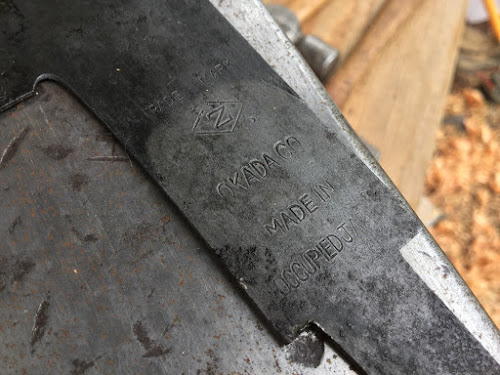 Okada hardware manufacturing company in Miki city has been making saws since 1943, and today is one of the leading manufacturers of "modern" Japanese saws. This saw is also stamped "Made in occupied Japan", dating this guy at being manufactured sometime between 1945-1952.

This saw doesn't strike me as being overwhelmingly high quality, but neither is it some mass produced piece of junk. The tang of the saw was forge welded, the saw plate is strongly tapered in thickness, teeth to spine and tang to tip....... possibly I see evidence of sen scraping marks.....although with so much damage from rust, it's hard for me to say. 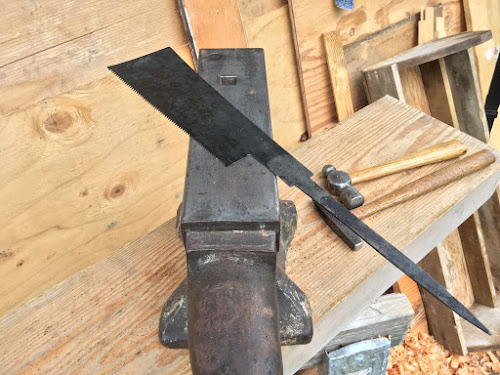 It has cleaned up tolerably well so far.

It is slightly bent, haha! 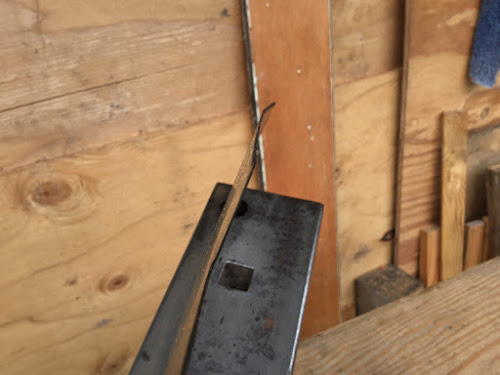 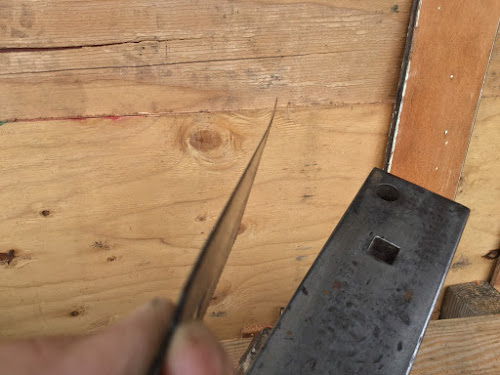 Look at how thin that spine is though. A knife's edge! 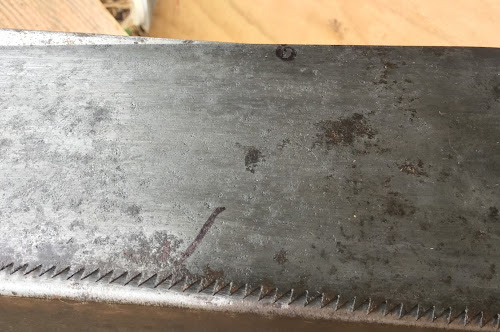 The primary bend is focused right here at the line drawn on the blade. The line is where I start. A reciprocal bend at the back of the saw is focused approximately at the dot.

When I flip the blade, directly opposite the "line", is a semicircular area of raised metal. This area needs to be worked at the same time, alternating back and forth. 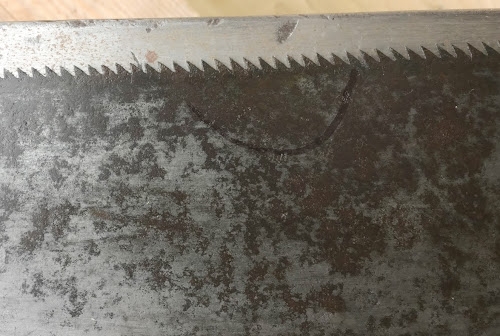 I strike fairly gently (using my square face tack hammer that I we are all familiar with by now. As much as I have been playing with bent saws.....I need to make a good cross-pein hammer!) at the line, perhaps 4 light taps. Then I flip the blade and strike along the semicircular line, maybe 4x but only 1/2 as hard. The greater danger seems to be striking too hard, as this saw is rather thin. I repeat this strike/flip/strike process 3 or 4 times and the major bend comes away nicely.

The blade is also cupped. It is as though each of the corners has been independently bent just a bit. 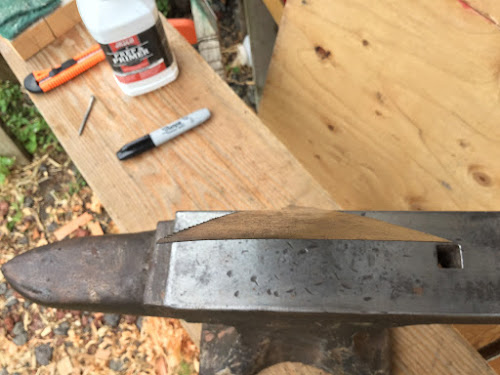 These lines that I have drawn show the angle and approximate number of times I strike, to work out most of the cupped portion. 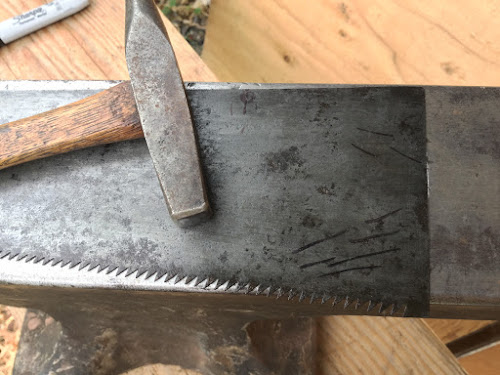 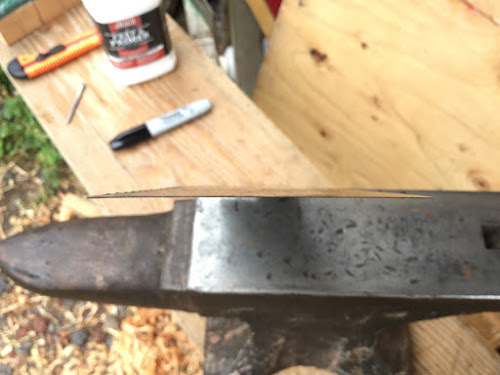 I sight the tooth line and it is looking much better, a good start I feel. 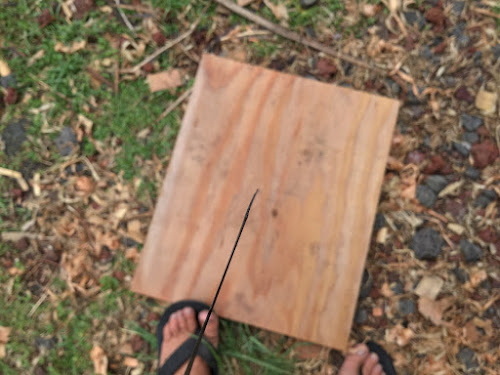 There is some distortion and twist deeper in the body of the saw, closer to the tang. The circles show where I will strike, this time using my light ball-pein hammer. 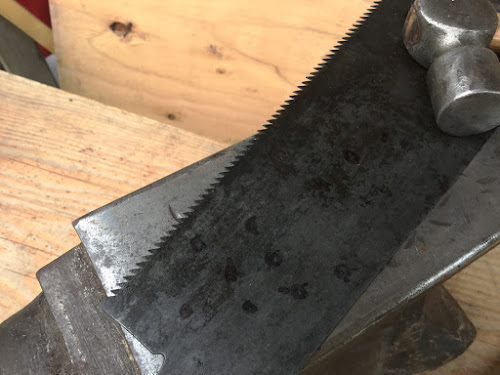 The blade is very close to being perfectly straight now, although the the set of the teeth will need some attention. 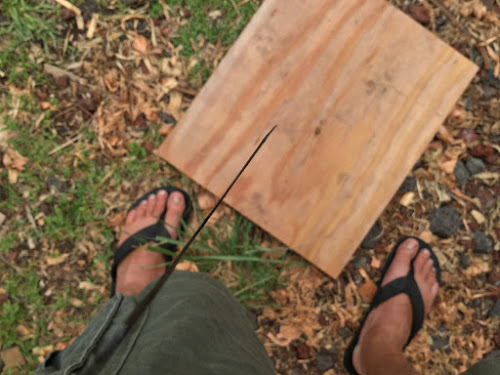 The back of the saw is looking very nice as well. 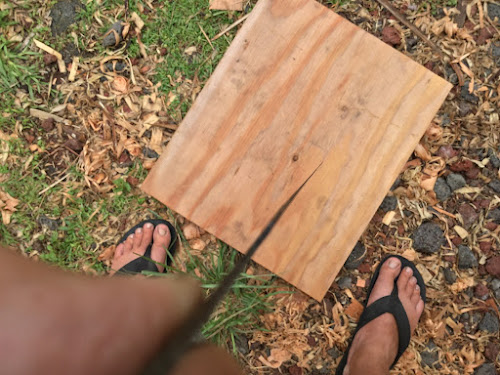 Such a thin taper!

Things are coming along very well, but seeing the remaining distortions is becoming difficult for my novice eyes. A light rubbing with my Washita sharpening stone brings the high/low spots into focus. 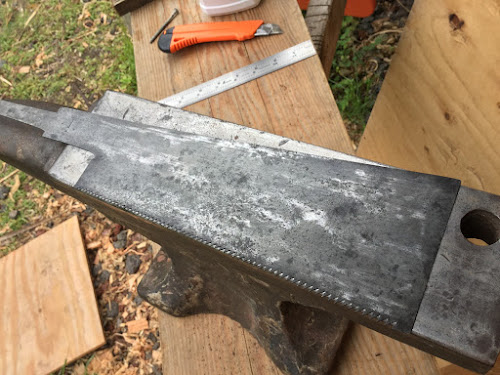 As before, I strike selectively, using a combination of the square face hammer to direct lines of force, and the round face ball-pein for a more general influence.

I get the saw *very* close to where I want it, close enough to start doing some test cuts. There is a slight amount of binding in the kerf, indicative of some remaining distortions in the body of the saw, and it is two things that I am trying to do here. I want to get rid of the remaining distortions, but I also want to try inducing some tension into the blade. I have only been hammering on this blade for about 15 minutes so far.

I get to having too much fun, and start thinking that I am actually getting halfway proficient at this un-bending saw stuff......

Two hours later, I have a saw that is starting to look frighteningly like a potato chip, haha. 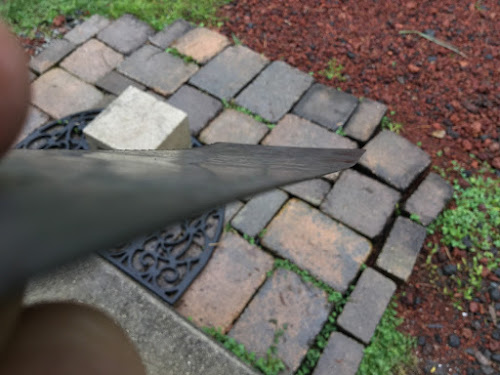 Greatly distorted steel, bent along multiple axis, combined with stretched and thinned metal.......poka-poka in the extreme! When the oilcan dent pops back and forth, the sound it makes is high pitched and ringing.

Back to school......and may tomorrow might be a better day.

Posted with Blogsy
Posted by Jason at 10:32 AM